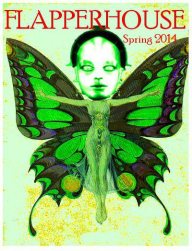 Firstly, this week marks the release of the first issue of FLAPPERHOUSE, a new magazine from editor Joe O’Brien. Joe is a long time visitor to the site, and I was honored that he asked me to submit. My story, “Axis Mundi”, (sample here!) is a sci-fi/horror story about derelict spaceships and divinity, is one of several new stories and poems to grace the pages of the first issue. It’s a terrific collection of varied voices, and the more I read, the more proud I am to be a part of it.

Secondly, I just finished True Detective last week. I wanted to hold off on the last episode for several years, just to inhabit the liminal space forever, but my wife demanded that we finish it. I’ve been enormously taken by the show, from the deliberate reference to the philosophy of Thomas Ligotti and other antinatalists in the first 15 minutes, to the series-wide use of weird fiction in general and Robert Chambers’ “The King in Yellow”in specific, the show was not only expertly written, shot and acted, it was also directly created to please me. Or, that’s how it felt across most of the 8 episodes. I’m fairly certain that this is, and will remain for some time, my favorite series on television, ever.

Since the show ended, I’ve been chewing on some things. One thing I’m maybe mildly disappointed with is that a lot of the intricacy of symbolism in set and costume design turned out to be coincidental more than intentional, but the show still has the feel of a puzzle box. And I adore puzzle boxes. With the writer mentioning that he’s a fan of some of my weird fiction authors (Ligotti, Barron, and Langan among them), and that he’s drawn direct inspiration from the genre (beyond the overarching King in Yellow references within the story), it had me on high alert for references, metaphors and symbolism. So, this is me pulling on threads and seeing what tumbles out.

I’ll try, Rust. Here’s my thoughts on one of the repeating images and concepts from the show: Black Stars…

END_OF_DOCUMENT_TOKEN_TO_BE_REPLACED

Sorry, yes, I am going to give away a copy of Jamais Vu Journal, Winter 2014, but at the end of this post (and one more on facebook, and one more on twitter), so feel free to scroll right past all this other hogwash.

Anyway, I didn’t quite hit my goals this year, but enough good was accomplished that I’m not going to lament about it too much.

I didn’t quite keep up a respectable output, still falling into the feast and famine patterns of writing a huge chunk and then not again for many days. Here’s the thing: I know “write every day” is the advice everyone gives writers, but… Sometimes that’s not possible. For me, with a demanding job and a family, it’s rarely possible, and just accepting that was a big step for me this year. It meant untangling a few threads of guilt at perceived failure from all thoughts of writing. If I found time, that became a good thing, not a reminder of yesterday’s failure . This translated into longer and longer stories, as I wrote four and five thousand words in a sitting. While I wrote two flash pieces this year for specific contests and calls, the other pieces I finished clocked in at 11k and 12k words, far longer than my old 2k word stories. I’m finding I quite like the wider canvas to work on, and that novelette and novella length stories are very difficult to find markets for… So, click through to see how this year stacked up:

END_OF_DOCUMENT_TOKEN_TO_BE_REPLACED

Jeff Clement and the good folks over at AuralStimulation have just sent me the following video, an awesome reading of “Dust” with music, stunning, eerie imagery, multiple actors and sound effects. Here it is, with my commentary, which is simply “wow”.

I’m a big fan of modern and old radio theater, and I think Jeff and company really nailed the aesthetic. There’s a lively community of people reading creepypastas on the YouTubes, and I’ve shared a handful before, but here’s a list I’ve compiled of all the ones I’ve found read from my stories. Hit “View Full Article” to see the rest.

END_OF_DOCUMENT_TOKEN_TO_BE_REPLACED

In the past few years, about a half dozen people have emailed me, wanting to adapt a story I’ve written for film. My answer has always been yes, but so far, not much has come of it (with the exception of one really interesting script adaptation of “Roadwork”.) This weekend, Tom Festo (twitter:@bigleaguetom), director/writer of “The Algorithm  (based on my story of the same name), sent me these behind-the-scenes production pictures, and graciously let me share them here. I’m very excited to see the final product. 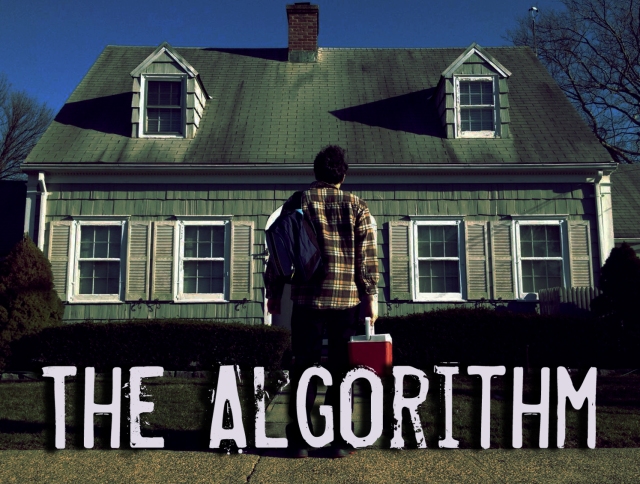 I’m really taken by this image, the symmetrical framing, the small cooler (such a nice touch), and a very creepy looking house. Location scouts are unsung heroes. I’m not just saying that because I’m related to one.

Hit “View full article” to see the other images.

END_OF_DOCUMENT_TOKEN_TO_BE_REPLACED

I hope this update finds you all as well as I have been.

In the past few months, I’ve had two anthologies released from Cruentus Libri Press, and another story featured in the Mad Scientist Journal. If you’ll forgive the self promotion, here are the links to read “Zero” at Mad Scientist Journal, or to purchase either anthology from Amazon:

END_OF_DOCUMENT_TOKEN_TO_BE_REPLACED

I didn’t meant to quit writing. But it happened. A month of not writing became six, and it was okay, I told myself. It was a difficult time, and it would surely end. Then I stopped justifying it to myself, and finally, stopped even worrying about justifying it. That’s how I quit writing for well over a year.

Part of it was from lack of a plan. When I started, I challenged myself to write a short story every week. This led to many a 4am night, blearily editing absolute nonsense, but it worked. Then I decided to give myself the room to play with longer ideas, and removed the arbitrary deadlines. Soon I was finishing work on a monthly basis, then bi-monthly, then it might take me a half a year. And this was when there was nothing else required of me. The moment fatherhood and a difficult pregnancy were my dominant concerns, writing slipped away.

END_OF_DOCUMENT_TOKEN_TO_BE_REPLACED

Can I confess something? I google myself.

It happens. I’m not proud of it. But if I didn’t, I wouldn’t have found these readings of some of my older stories.

Youtube users MrCreepyPasta and ZoomingDakota have posted audio versions of two of my older stories, Fog and Chiasma. And they’re both pretty damned awesome.

Videos after the break…

END_OF_DOCUMENT_TOKEN_TO_BE_REPLACED

A few folk have asked me over the last few months for some recommendations of horror fiction, and while I have more than a few suggestions, I’ve always put aside the task of compiling any sort of master list. And I’m still not going to.

Instead, let’s do this together. To start, here’s just a few films and books that have inspired or affected or intrigued me. I’ll try to keep this going with a little regularity. Also, on twitter I frequently do ultrabrief reviews, but this will give me a chance to be a little more detailed.

I’d also love your suggestion, so please comment and tell me your favorite or newly discovered films, books, authors, news stories, podcasts, terrifying Wikipedia articles or other scary ephemera of the web. There’s not a story I’ve written that didn’t have a clear inspiration point, and I always need more.

Some of these recommendations are likely old hat for many of you. I’ll try to get more obscure as I go. No numbers, or ratings. If I like it enough to talk about it, then I recommend it.

END_OF_DOCUMENT_TOKEN_TO_BE_REPLACED

I warned you I’d start doing this more. Proceed at your own risk.

Over on my twitter feed, I got a little excited about the Lev Grossman article in response to Arthur Krystal’s article in the New Yorker (unlinked, as you have to pay to read) about genre fiction and traditional literary fiction. I debated putting those terms in quotations.

Before I even finished the article, I had to google one of the books in the lead image that I hadn’t heard of, Zone One, by Colson Whitehead, which led me to this review by Glen Duncan.

So, genre fiction: pornography, literary fiction: intellectualism. Got it. Then I read this part:

END_OF_DOCUMENT_TOKEN_TO_BE_REPLACED

I had a good weekend for writing, finding the time to work out a new short piece, First Souls, (that I will be posting within the next day), and getting some good solid editing on some other work. Runner B stopped mid stride in the last couple weeks, as I’ve found little time to work on it from home. I’m currently on paternity leave, so my time to write is dictated by the nap schedule of a capricious id that cares little for quiet, uninterrupted working time.

First Souls was something that bubbled up between running and a bout of what I hope was food poisoning last week, and it needed to get on the page. If I didn’t give it a shot at life, it would have eaten away at me while I tried to work on Runner B. I will return to Runner B, but for some reason it’s proving more challenging than I’d thought.

I’m trying to take writing much more seriously now, scheduling out the tasks I need to address, including research of markets, agents, and publishers. Finishing Runner B is next on my task list, followed by final drafts and submissions of two other pieces. No more rejections or acceptance letters have come back in, and I’m about to send queries to some of the more tardy markets to see if I can goose them into a response, if only to free up the pieces for other submissions.

Two other things of note on the publishing front:

END_OF_DOCUMENT_TOKEN_TO_BE_REPLACED

Barricade
Before
Chiasma
Collision
Exit
Fog
Horror Show (Film)
How This Ends
No Man’s Land
North
Quiet
Regret To Inform
Sick, or The Algorithm
Special
Starfall (A Fragment)
Thaw
The Hole in the Wall (Original and Revised)
Up
Underground
West

The Josef K. Stories
Create a free website or blog at WordPress.com.