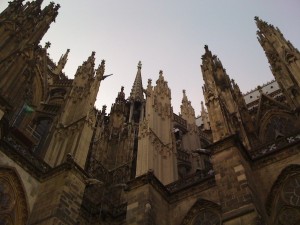 My apologies for the late hour, but real life conspires against my efforts to finish a long overdue draft of “One”. It is nearing its end, and hopefully before the end of the month, I will post a completed first draft.

“One” is proving troublesome, as I’ve been working at it on and, mostly off, for the last six months. I find the more I plan something out in advance, the easier it is to procrastinate on actually following through on it. The excitement, for me, is seeing where an idea will go once I set it free, and if I already know, well… it becomes difficult. The problem is, I know exactly where “One” goes, and although I like it, it feels stale now.

Looking forward, I’ve just returned from Germany, whose Gothic cathedrals, castles, and river-towns are responsible for a trio of new or reignited ideas that I’ll begin as soon as this latest story is completed. One set in the present, one set during the aftermath of the second world war, and one set before recorded history. It’s this last and oldest idea I am most excited about; expect to see it completed first, before September ends.

On the publishing front, I’ve started to receive my first rejection letters from a variety of publications. As per authorial tradition, these letters now hang on my wall, and for every one I receive, I submit two more stories. I will of course share with you if a story is accepted for publication.

Thank you for your patience, and I promise, you will not have to wait much longer.

3 thoughts on “Metapost: Upon Returning”

Barricade
Before
Chiasma
Collision
Exit
Fog
Horror Show (Film)
How This Ends
No Man’s Land
North
Quiet
Regret To Inform
Sick, or The Algorithm
Special
Starfall (A Fragment)
Thaw
The Hole in the Wall (Original and Revised)
Up
Underground
West